"Dead Souls". The authors are the head of the investigation and the prosecutor

Corruption scandals constantly shake the Stavropol Territory. The arrests of officials of the Government of the Territory, plenipotentiary representatives of the Governor, Ministers and Heads of cities no longer surprise residents.


The Stavropol land, being the border with the southern republics of the Russian Federation, has fully absorbed the Caucasian mentality. That is why “local residents” are rarely appointed to the leadership of various executive bodies. Prosecutors — from Altai, Omsk, heads of the Ministry of Internal Affairs — from Krasnoyarsk, Penza, etc.


A rare "local" appointee is the head of the Investigative Directorate of the Investigative Committee of the Territory Ivanov Igor Nikolaevich. There is order in his department, leaders in municipalities are rarely replaced. Incl. harmony in the city of Pyatigorsk between the head of the SO SK Parfeinikov I.S. and Prosecutor Keller V.A. According to a Rucriminal.info source, they do not hide friendly relations — birthdays and departmental holidays together, Tuesday and Thursday at lunchtime, a joint pool in a sanatorium, etc.

There is a similar harmony in making procedural decisions. So, with regular constancy, the leadership of the SO SK


Pyatigorsk does not see obvious and egregious cases of violation of the legislation of the Russian Federation, occurring within the walls of the branch of the PRUE. G.V. Plekhanov in the city of Pyatigorsk.

Director of the branch Aliev M.K. Not hesitating to declare the presence of close relations with the head of the investigation department and the Prosecutor of Pyatigorsk, he also flaunts relations with the leadership of the economic block of the Main Directorate of the Ministry of Internal Affairs of Russia in the North Caucasus Federal District (both natives of the KCR), the support of the Deputy Chairman of the Government of the KCR Tambiev R.A. and the head of Rosobrnadzor of the Russian Federation Muzaev A.A., the result of which is expressed in opposition to the adoption of legal decisions and the absence of any reaction from Rosobrnadzor.

Within the framework of numerous applications to the Prosecutor’s Office and the Investigative Committee of the city about violation of federal laws and departmental instructions, a set of measures is being carried out aimed at counteracting legal and comprehensive proceedings — persons who have no relation to the events are being questioned, documents that have nothing to do with the essence of the statements are requested from the branch. witnesses possessing incriminating information about illegal actions in the branch are ignored when conducting investigative checks.


According to the statement of the deputy of the City Duma of Pyatigorsk L.G. Kartashova. to the Investigative Committee of the Stavropol Territory on the illegal actions of M.K. Aliyev, a report was drawn up on the presence of four corpus delicti and, according to the existing practice, it was sent for making a procedural decision on jurisdiction to the investigative department of Pyatigorsk, where it turned into another "refusal material" where the witnesses, as well as the applicant, were not questioned at all when making procedural decisions.


As a story source Rucriminal.info, in January 2021 Parfeinikov I.S. an additional collective statement was sent with the specification of the facts of illegal activity: on the appropriation of funds by the branch management in the form of bonuses to the teaching staff, abuse of office by the branch management, who gave instructions to give positive marks to persons from the Karachay-Cherkess Republic and other republics who did not physically appear in the branch and did not passed exams, the presence of "Dead Souls" teachers and much more. The result is the same.

No matter how hard Keller and Parfeinikov tried to cover up Aliyev’s friend, it is no longer possible to hide the latter’s deeds. So, in April 2021, the Ministry of Internal Affairs in Pyatigorsk initiated the first criminal case under the article Fraud (KUSP 28447), the efforts of the first two were initiated not against Aliyev and his deputy Semyonova, but “on the fact” of committing a crime, which means a dubious prospect with such a warm the attitude of the supervisory authority. The fact of the initiation of a criminal case by another investigative body did not correct the thoughts of the Prosecutor and the head of the city’s Investigative Committee, they continue to refuse to initiate a dozen criminal cases along their lines of supervision.


As soon as information about this appeared in the media, the Investigative Committee of the Territory the next day reported to the central office of the TFR on the legality of the decisions made in Pyatigorsk.


The curator of the process of rejection materials in the UK is D.G. Chernyshov. (in 2012, a check was carried out on the fact of inaction and untimely initiation of a criminal case, which subsequently led to the rape and murder of a 10-year-old child by a defendant with 3 convictions)


Ambitions Parfeinikov I.S. on the position of the deputy head of the SK of the region, as well as the reappointment next year Ivanov I.N. can be dispelled. 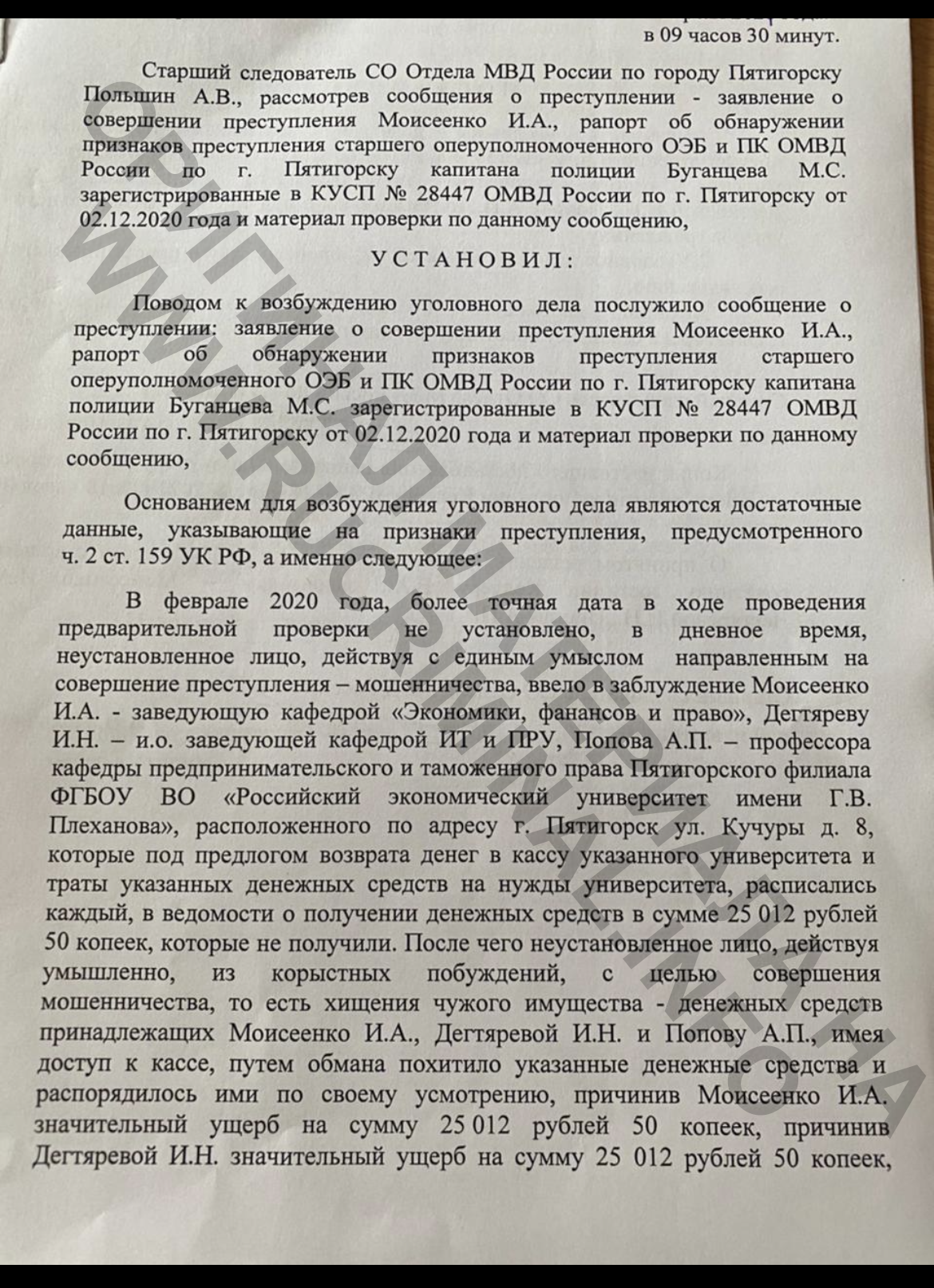 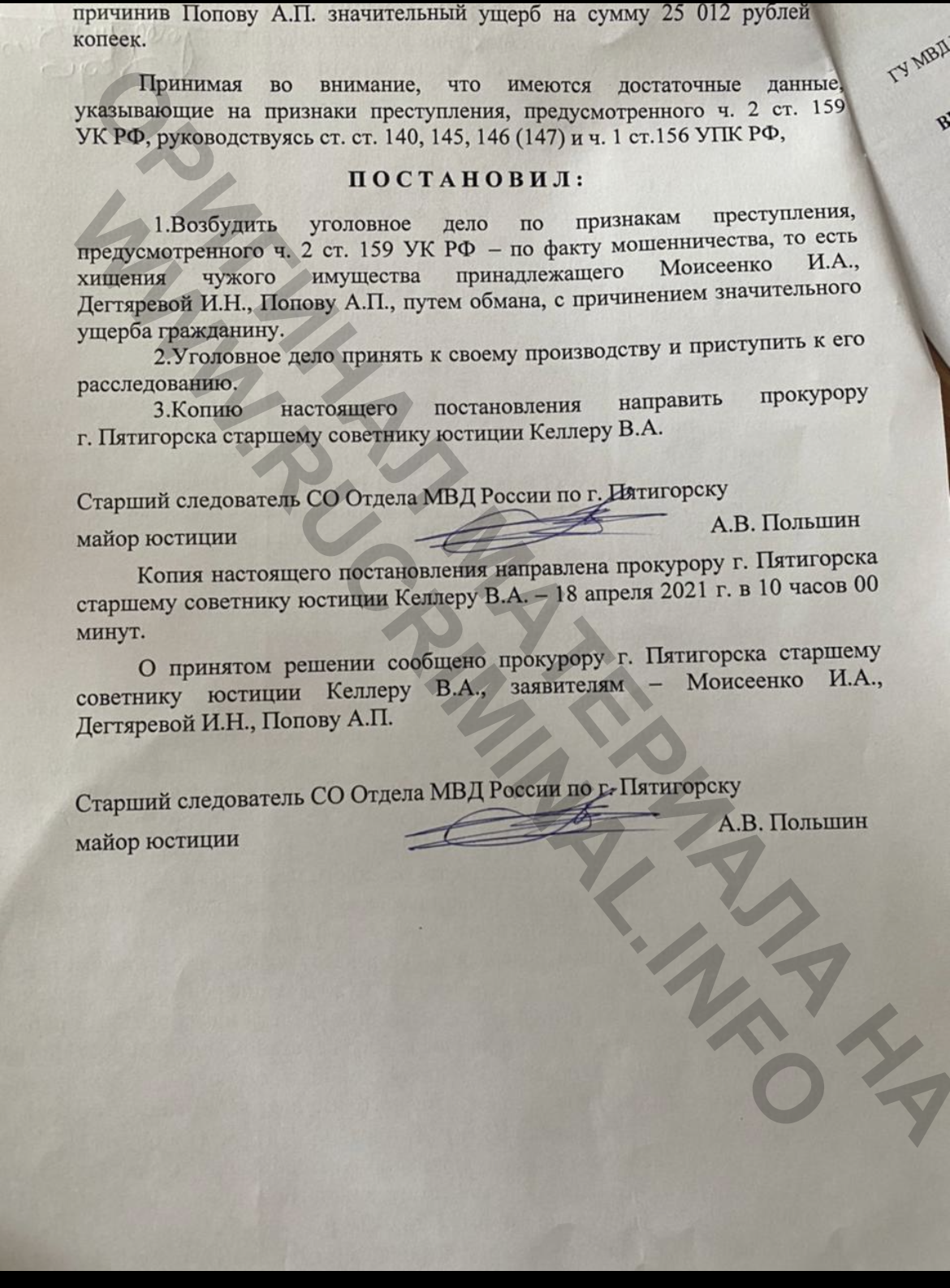